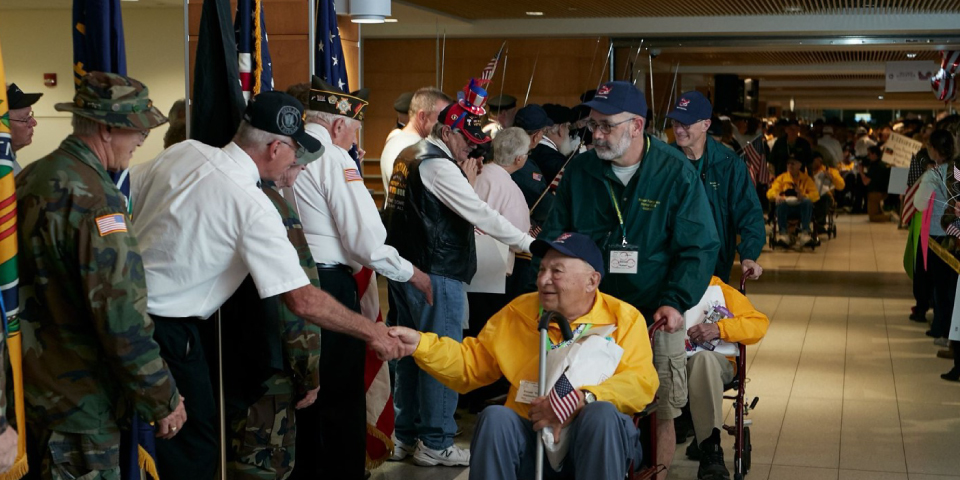 In honor of Veterans Day: A non-veteran's perspective on 'thank you for your service'

Steve Kaiser did not serve in the military.

He was young during a time of peace, the post-Vietnam era, with no family members in the military except a grandfather and uncle who was in Vietnam and died at age 28 from thyroid cancer.

Within about 24 hours in October, Kaiser did serve as a guardian and witnessed 111 veterans reliving their memories on the most recent Never Forgotten Honor Flight out of Central Wisconsin Airport (CWA).

“An incredible experience," said Kaiser, operations manager for the Integrated Research and Development Lab, Marshfield Clinic Research Institute. “I am doing a lot of processing still and to be a part of the energy, that dynamic, is incredibly powerful."

Kaiser was asked to be a guardian for his father-in-law, Don Kleinschmidt of Wausau, who'd served in the U.S. Navy as an aviation mechanic during the Cold War era and in the reserves during the Vietnam era. After a three-year wait, he was one of four from Korea and 107 from Vietnam and their guardians on Honor Flight No. 38.

“It was an absolute honor to spend the day with Don and experience the monuments and memorials through his eyes," Kaiser said. “I was impressed with the police escort through Washington and we felt we were the president of the United States because cars stopped for us. When we arrived at Reagan International Airport there were 200 people there saying 'thank you for your service' to the vets. When we got back to CWA it was standing room only, 6-8 people deep, clapping. Most of the vets are Vietnam era and they never got this reception. This is the reception they deserved."

Veteran support through Honor Flight, community organizations like American Legion and Veterans of Foreign Wars chapters, and employers like Marshfield Clinic Health System is very important. According to Human Resources, 346 out of 10,610 employees and staff have disclosed they are a military veteran or are now serving in the military. Also, the Health System has been recognized for its support of veterans for many years.

The area Honor flight chapter, which began in 2010, serves veterans in 13 counties in northern Wisconsin - Barron, Clark, Iron, Langlade, Lincoln, Marathon, Oneida, Portage, Price, Rusk, Taylor, Vilas and Wood. Wisconsin has five Honor Flight chapters. The trip is free for veterans, thanks to fund raisers. Guardians pay their way and are told, “This is the best day you will pay to work."

Kaiser went through two hours of guardian training before the day-long trip and escorted Kleinschmidt, pushing him in his “honor chair."

As part of the experience, friends and family were asked to write letters to their veterans that were distributed during “mail call" on the flight home. Kleinschm​idt didn't open his on the flight. Others didn't, either.

​“Many veterans don't talk about their service, especially those who were in conflict," Kaiser reflected. “Part of the mission of this flight is to allow them to open up, to heal, at least start that conversation and that's why a guardian is a family member or close friend."​

He thought about the Honorable Melvin Laird when they toured Arlington National Cemetery, where the former Secretary of Defense and Seventh District Congressman, “the Man from Marshfield," is buried. That, too, was powerful since Kaiser knows a pen used to sign the Vietnam Peace Agreements Jan. 27, 1973, is in Laird's collection on exhibit outside Froehlke Auditorium.

“How do you say how much it exceeded your expectations?" he asked. “Ten-fold? A hundred-fold? It was so much more than what I expected it to be and it's almost impossible to describe the emotions when veterans are being welcomed home like that."

For the veterans, the most moving moments were at the Korean and Vietnam memorials. For Kaiser, it was twofold: quotes from the FDR memorial and a text from Kleinschmidt after arriving home: “Steve, I can't thank you enough for being my guardian all day. It is something I will forever remember. Thank you very much."