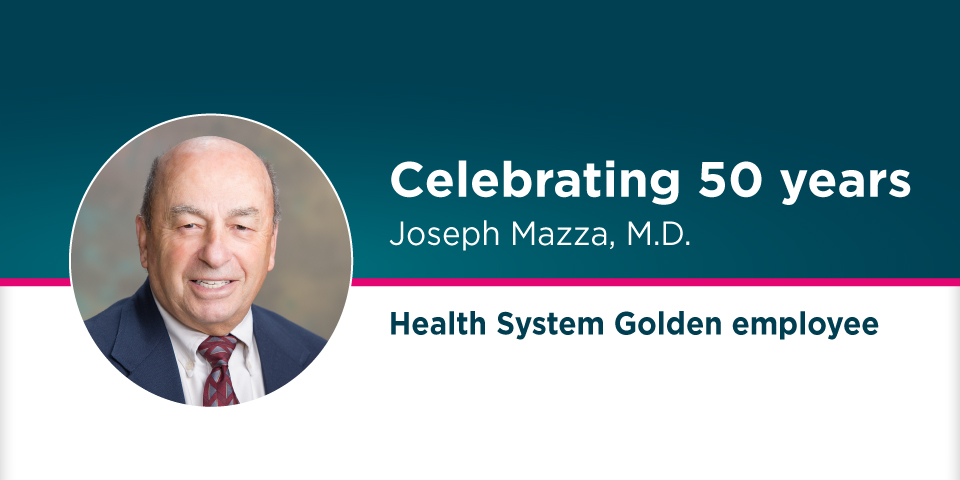 In his time with the organization, Dr. Mazza has served as the assistant director of the internal medicine residency program and director of the medicine/pediatric program. In 1992, he became director of medical education.

​“One of my proudest moments during my career was when I was selected to be the director of Medical Education," said Dr. Mazza. “My passion for learning and teaching has never wavered or been dampened through the years. I have always felt a compelling responsibility to impart my knowledge to others through teaching."

Dr. Mazza continues to teach in the residency programs and mentor those interested in clinical research. In his time with the Health System, he has been the recipient of four teaching awards and the Executive Director's Award from the Research Institute. He also became a Master in the American College of Physicians in 1999.

“When I stopped seeing patients, I was given the opportunity to shift learning needs to the Research Institute," Dr. Mazza said. “Technology had put the biosciences on the fast tract, and I could not have found a more dedicated group and better learning environment to continue my need to continue learning medical science."

Dr. Mazza reached a milestone in 2018 when he surpassed 150 peer-reviewed scientific manuscripts in various national and international journals. His writing also includes three books, one of which has three editions, and 10 chapters of scientific literature. He also authored a book on the history of the Research Institute titled “A Fifty Year History of Marshfield Clinic Research Foundation 1959-2009," published in 2013.

“Dr. Mazza embodies all of the good of Marshfield Clinic Health System. He provided the very best medical care to his patients for decades. He loves to teach and is an amazing role model for hundreds of health care providers," said Robert Haws, M.D., director of the Clinical Research Center and pediatric nephrology physician. “His enthusiasm for teaching has never waned. He loves science and is one of the greatest physician-scientists to champion research at the Research Institute."

Dr. Mazza began his career at the Health System after a five-year fellowship program in hematology and internal medicine at Mayo Clinic. He currently lives in Marshfield with his wife, Ginny.

“It has been invaluable to have Dr. Mazza be a part of our Health System for these years. He brings an unmatched enthusiasm for research and the value it provides to the Health System," said Amit Acharya, B.D.S., M.S., Ph.D., executive director of the Research Institute. “Dr. Mazza has impacted many lives in such a positive way. I am so thankful for all his guidance and leadership."​